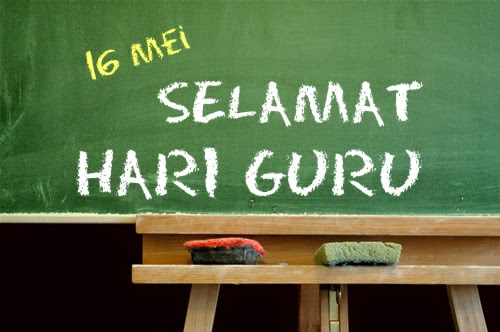 The 16th day of May has been designated as Teachers Day nationwide. This is to remember and commemorate the services and sacrifices of individuals who are called teachers. Remember, no matter what position we hold now or where we are now in life, our achievements and the knowledge we have attained would have definitely started from the guidance and tutelage of a teacher. 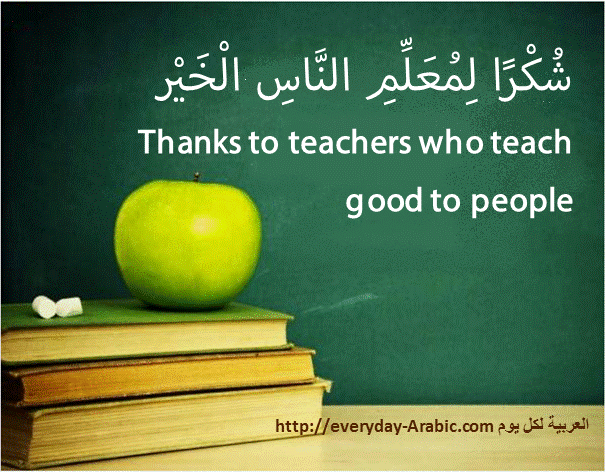 A teacher is considered a Murabbi, an educator who not only imparts knowledge through the conventional approach, but also through the holistic approach. They are highly respected by the religion, as well as by the community, because they inherit the duties and responsibilities of the Prophets in guiding people towards the path of truth.

Teachers also shape human civilization through education and dissemination of knowledge. The huge role of teachers is equivalent to the role of stars in the sky which guide mankind at night when they travel, either on land or at sea.

Teachers are also the source of reference to address errors and confusion in the society or community. It is not limited to certain areas only, but encompasses all aspects of knowledge and expertise that exists on earth.

Thus, the Al-Quran has never marginalized a teacher’s role, as indicated by Allah SWT in verses 43 and 44 of Surah al-Nahl, which was recited at the beginning of this sermon, and has the following meanings: “And before you, also the messengers We sent were but men, to whom We granted inspiration: if you do not realise this, ask of those who possess the Message. (We sent them) with Clear Signs and Books of dark prophecies; and We have sent down unto them (also) the Message; that you may explain clearly to men what is sent for them, and that they may give thought.”

Individuals who possess knowledge are individuals who have been chosen by Allah SWT to receive benefits and blessings. Moreover, they are also responsible in preserving and maintaining the religion.

Reflect upon the meaning of this hadith from Rasulullah SAW, as recorded by Imam al-Bukhari RH, and narrated by Mu'awiya RA: Which means: "Whoever Allah wills good things, He will make him someone who meticulously understand matters of religion and indeed, I am only the one that disperses it, but Allah SWT grants it and some of my people still continue to practice the religion of Allah SWT, there is not anyone from amongst those who violate them can damage them, without the command and order of Allah SWT."

Imam alShafi'e RH, for instance, once said: "Malik bin Anas is my teacher. If there is no teacher like Imam Malik and Ibn Uyainah, then the knowledge possessed by these scholars would disappear from this country.”

The teaching profession is not only an occupation that is honourable and noble, but as a teacher, teachers would also have to face many great challenges to educate, guide, develop and nurture each student's moral character. The goal is to shape and develop students who will one day become individuals who will be useful and invaluable to the religion and the nation.

To face the ever increasing challenges in educating students, the Ministry of Education Malaysia is seriously concerned with the role of parents and the community in relation to education.

Thus, e-Sarana (or e-Tools) program as contained in the Malaysian Education Blueprint (MEB) 2013 to 2025 was created. E-Sarana is an effort to increase parental involvement in their children's learning within and outside the school. The skills and expertise parents have are shared, in the effort to help build their children’s education.

Therefore, it is important that parents are involved with their children’s education and take appropriate action to help them achieve future successes.

Parents should also serve as teachers at home. As Allah SWT says in Surah Al Maidah verse 2. Which means: “Help one another in righteousness and piety, but help not one another in sin and malice: fear Allah: for Allah is strict in punishment.”

To end today’s sermon, the mimbar would like to invite the congregation to appreciate and to reflect upon the gist of the sermon delivered, and take them as guidance in our lives, namely:

First: The services and sacrifices of teachers should be respected and appreciated, not ridiculed or humiliated;

Second: Parents and members of the society should also take up the role as teachers outside school;

Third: All parties should work together to uphold the dignity of education in order to achieve happiness and success in this world and in the Hereafter.

Finally, let us together reflect upon the words of Allah SWT in Surah al-Jumu'ah, verse 2: Which means: “It is He Who has sent amongst the Unlettered (the Arabs) an apostle (Muhammad SAW) from among themselves, to rehearse to them His Signs, to sanctify them, and to instruct them in Scripture and Wisdom although they had been, before, in manifest error.” Maqasid have taken centre stage in the contemporary studies of syariah, just as it has also become an engaging theme of the government.

March saw the introduction of Malaysia’s Syariah Index at a Jakim (Islamic Development Department)-sponsored convention in Putrajaya, with the participation of more than 130 experts and researchers from local universities. Malaysia may well be the first to embark on a programme to integrate maqasid into government policy.

This article provides an overview of the syariah blueprint on the importance of maqasid, how they are known and identified.

The principal purposes of syariah are outlined under five main headings: protection of life, preservation of religion, upholding the integrity of the human intellect, protecting the family and protection of lawfully-owned property.

What this means for Malaysia is that the various branches of government will uphold and promote these values within their respective capacities. The maqasid (plural for maqsad) identify the higher purposes of the law, which are meant to be secured through the implementation of that law.

Thus, it is implied that the rules of syariah are not meant for their own sake, but to secure and realise certain objectives.

When the letter of the law is applied in a way that does not secure its intended purpose, the justice and benefit it is meant to secure, or when it leads, on the contrary, to harm and prejudice, the law is most likely reduced to a purposeless exercise.

The laws of syariah are generally meant to secure people’s welfare and justice. But, the detailed rules, commands and prohibitions of syariah also have their specific purposes, which are often identified in the text of the law itself, or by recourse to interpretation and ijtihad (independent reasoning).

One often hears of a clever lawyer bent on working his way through the law at the expense of twisting it to suit his purpose, regardless of what the law might have intended to secure.

This is why the syariah penalises what is called in the fiqh jargon, as al-Mufti al-Majin (a trickster or fraudulent mufti), who does just that, either to please his client or follow his self-seeking interests.

This is a violation of syariah, which is in principle a divine law, and twisting it in such a way is reprehensible. The renowned Andalusian scholar, Ibrahim al-Shatibi (d.1388 CE), who wrote extensively on the maqasid, stressed that a clear understanding of maqasid equips one with the ability to identify instances of distortion and abuse, adding that anyone who manipulates the syariah by isolating its letter from its intent and purpose, is guilty of violating the purpose of the lawgiver.

Knowledge of the maqasid, thus, helps keep the letter of the law and its spirit in harmony with one another.

To illustrate more specifically how the letter of the law can sometimes move in a different direction from its proper intention and purpose, one may look at some of the syariah contracts: the proper purpose/maqsad of sale, for instance, is transfer of ownership of the object of sale from seller to buyer in exchange for a price; the maqsad of lease, is transfer of the usufruct of its object; the maqsad of marriage is procreation of the human species, and that of giving a gift is donation (tabarru’) and show of goodwill — just as another maqsad of giving a gift is transfer of ownership to another party without a consideration.

If any of these contracts are manipulated such that they fail to secure their valid syariah purposes, a distortion is likely to have occurred. When a sale is used to disguise usury (riba), and when marriage is used for hedonistic indulgences and a quick divorce to follow, the purposes of syariah have been distorted in each case.

This is because marriage is a life-long contract with the purpose of procreation of human species, friendship and support, which must not be violated.

How are maqasid known and identified? Maqasid are identified in the clear text of the Quran or hadith, or else by the general consensus (ijma’) of scholars, failing which they may be identified by recourse to ijtihad.

The language of the Quran, or hadith, may either be explicit on a certain purpose, or it may be implicit and require a degree of scrutiny.

For instance, when the text refers to the benefit, rationale, or consequences of its rulings, the judge and jurist are given a certain insight into the purpose/maqsad of that law, which they should strive to secure in their decisions.

Ibn Qayyim al-Jawziyyah (d.1350 CE) has noted that the number of such references in the Quran alone reaches not just one or two hundred, as some commentators had earlier estimated, but in over 1,000 places.

The Quran has, in diverse manners of expression, identified the reasons, benefits and consequences of adherence to its ordinances, or harm that may accrue from their defiance.

All of these are then used as indicators toward identification of the maqasid. For instance, when the Quran characterises itself as “guidance and mercy” to the believers (10:57), and where mercy and rahmah also signify the most favourite of the 99 Excellent Names of God (as in al-Rahman and al-Rahim) — compassion and kindness becomes a cardinal objective of Islam.

Anyone who uses Islam as a instrument of brutality and oppression is guilty of distortion and abuse. Al-Shatibi has also added inductive reasoning (al-istiqra’) as a reliable method by which to identify the maqasid of syariah.

This means that the researcher looks at the data of the Quran and hadith generally. The text may have made numerous references to a certain purpose without explicitly declaring it as such.

When all such references are read together, their collective meaning emerges and leaves little doubt on the identification of that purpose.

The five maqasid mentioned above were also identified by this method — as they are nowhere so listed in the text. The methodology that is so developed aims at the integrity of maqasid and prevention of unfounded claims in their name.

A mere claim, therefore, that such and such promotes the family, or that it protects the religion and so on would need to be verified before it is made the basis of action or a government policy initiative. Mohammad Hashim Kamali The NST Columnist 13 MAY 2016 @ 11:01 AM